Polymineralic hydrothermal veins in the Paleozoic Jandaq ophiolite gabbros (Central Iran); Evidence for ingression of high temperature seawater-derived fluids in to the gabbroic section of the Paleo-Tethys oceanic crust

The Paleozoic Jandaq ophiolite is situated in the western part of the Central-East Iranian microcontinent and belongs to the Paleo-Tethys Ocean. This ophiolite consist of mantle peridotite and serpentinized mantle peridotite, metagabbro, basic and ultrabasic metamorphosed dikes, metapyroxenite, amphibolite, rodingite, and listwaenite which are covered by Late Paleozoic schist and marble. The joints and cracks of the Jandaq gabbroic intrusions are filled by hydrothermal minerals. Rock-forming minerals of the hydrothermal veins are calcite, prehnite, garnet (grossular-andradite), epidote, clinopyroxene (diopside), chlorite, albite and sericite. Calcite and garnet are the last-formed minerals in these veins and calcite with coarse-grain morphology is the major mineral. The main textures are granoblastic and poikiloblastic.

Very low abundances of Al, Ti, Na, Cr and rare earth elements (REEs) in clinopyroxenes support their metamorphic origin. The high abundance of calcite in the investigated veins, the presence of clinopyroxene, garnet, prehnite and epidote as Ca-rich minerals, associated with the positive Eu anomaly in the chondrite-normalized REE patterns of minerals support that the penetrating hydrothermal fluid were enriched in CO2 and leached the lower crust gabbros before crystallization. Accordingly, the hydrothermal veins in the Jandaq ophiolite are interpreted as remind of high temperature circulation of seawater and carbonated fluids. 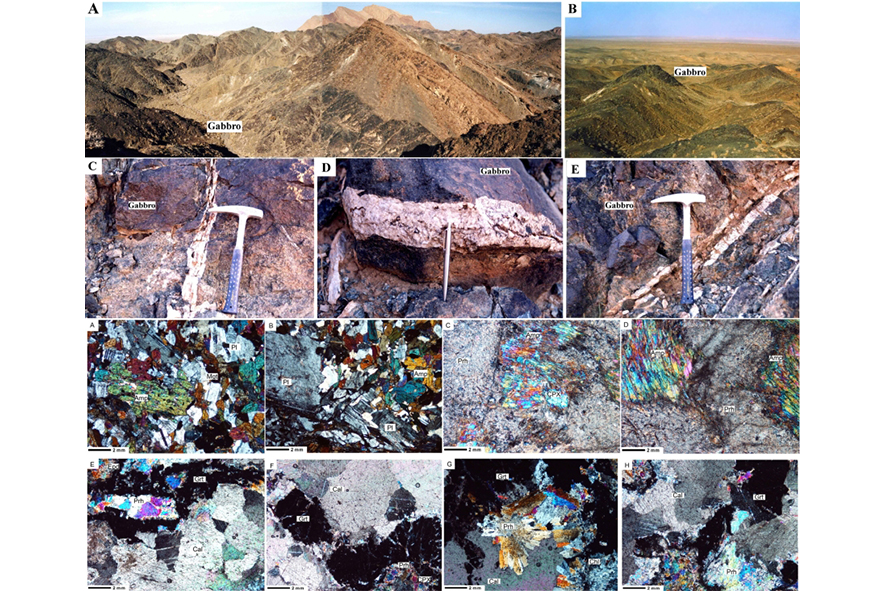