The saga of tetrapod tracks, trackmakers and trackers in Italy

The 150th anniversary of the publication by Giulio Curioni, which represents, in all respects, the first Italian scientific contribution on fossil tracks of Italian tetrapods, becomes a reason to take stock of the current state of the tetrapod ichnology in Italy.

After having introduced this branch of palaeontology, explaining briefly its methods, its usefulness, its beauty in a slightly unconventional tone, the history of the first century or so of the ichnology on Italian tetrapods and some ichnologic research developed by Italians in other countries is summarized. Between 1870 and early 1900 some authors reported tracks mainly in what have now become the classic resorts of Trentino-Alto Adige, Lombardy and Tuscany.
Subsequently, throughout the first half of the last century, the publications in this field were sporadic and often linked to research activities born with other purposes.
P. Leonardi (1940-1967) began the first systematic tetrapod ichnological activity, which occurred  on tetrapod tracks of the Late Permian of the Trentino-Alto Adige.

In his footsteps, starting in 1972, a new team of four undergraduate students from the University La Sapienza in Roma relaunched on a larger scale the ichnology of Italian vertebrates, with targeted campaign activities and systematic studies on the Permian tetrapod tracks. Around the same time, in Padova, too, research was begun specifically devoted to the Ichnology of vertebrates in Palaeozoic and Triassic formations.

From these experiences and subsequent ones arose the vertebrate ichnology schools of Roma, Padova, Pavia and so on. Since then the field has expanded a lot and currently about thirty Italian vertebrate scientists study footprints and trackways of tetrapods from Italy and from many other countries.

Although until the 1980s of the last century it was considered almost impossible to find tracks of tetrapods in Mesozoic and low Cenozoic Italian deposits due to the predominantly marine conditions, dozens of sites with fossil footprints, including dinosaurs, were discovered in more than 50% of the 20 Italian regions for a stratigraphic range from Upper Palaeozoic to Holocene. 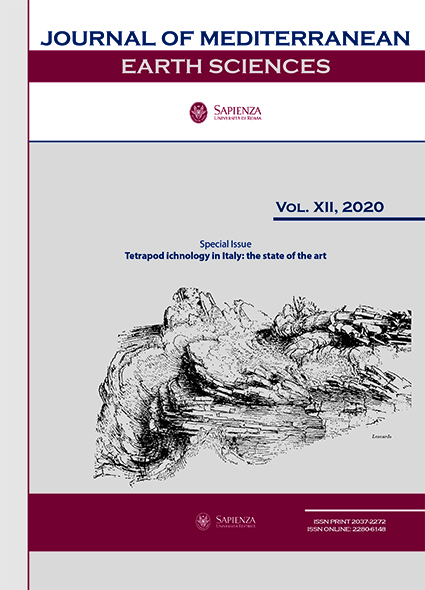 Vol. 12 (2020): Special volume-Tetrapod ichnology in Italy: the state of the art

Tetrapod ichnology in Italy: the state of the art